This document is the user's guide or operating manual for the LX1 display. Certain programmable features described below will require the WButil configuration software to be used. LX1 is field re-programmable so this document may be updated from time to time with information on the latest features.

Typically the LX1 will just work - plug it into a Tech Edge controller and it displays AFR (with stoich at 14.7). Press the A button once and LX1 changes to the second view and shows Lambda (stoich is 1.0). Hold down the A button longer than 6 seconds and the current view becomes the power-up view.

If you have a Tech Edge controller with on-board logging memory then the B button works to stop and start (ie. toggle) loggging to memory. Other features are described below, but remember LX1 works out of the box and most people will find no configuration will be required.

The most common problem users experience is the nd, or no data, display as shown at left. It's caused when LX1 doesn't see data from WBo2. You will normally never see this, but if you do, the solution is described below.

A common "problem" we are asked about is the "lean" display shown at left. It is not a problem at all, the display is simply saying the controller and sensor are measuring a value where any "normal" vehicle will not be run. You will see it when the sensor is sitting in free-air, and if/when you test your controller as described here.

You could see this if you use fuels that have a stoich value much lower than 14 (this includes many alcohol fuels such as E85, methanol, etc.) The "rich" display is easily "fixed" by running a CCF file found here.

The following information relates to LX1 firmware version 0538 or above. In the descriptions of the various displays, screen names are shown in bold blue. Note: after re-configuration, some of the default behaviour detailed below may change. The default screen is the display last saved, and is initially the AFR display. 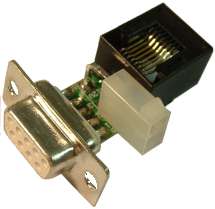 LX1 can be field upgraded with new firmware, and its display modes re-configured, using the LX1 interface adapter (*) shown at left. How the adapter is physically connected both to LX1, a PC, and source of power is shown at left. Power is obtained from WBo2's two pin power cable, or a 12 volt power supply is used. Click on either of the images for an enlarged popup, or for the programming adapter's schematic here. Note (*) see here for info on the old interface adapter.

The FLASH.exe program can be used to update LX1's firmware, remembering that the LX1 must be in config mode for correct reflashing.

Config mode on LX1 is entered by holding the left (A) button down ONLY while power is being applied to the display. Each time LX1 is power OFF, it will come back up in normal mode unless it sees the button depressed during its power up cycle. As reflashing is a two stage process (loading new code, then new EE-data), the A button should be held down until the reflash process enters the second stage where the EE-data is updated.

The CONF.exe program will soon provide support for LX1, and is used to change LX1's default behaviour and the display functions.

This section will be updated when the PC based configuration options (in the CONF.exe program) for LX1 are completed.

Note: this document is subject to updates ....